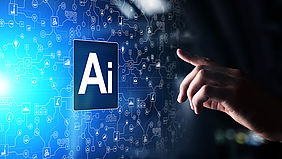 Artificial Intelligence (AI) is a hotly debated topic, and it is widely predicted that AI will have a significant impact on future forms of work, business conduct, and everyday life. It is already playing a role in many areas of life - from customer services to the treatment of cancer. It even helps commuters navigate their way to work through the morning traffic.

While AI is not easy to define, one dictionary describes it as “the theory and development of computer systems able to perform tasks normally requiring human intelligence, such as visual perception, speech recognition, decision-making, and translation between languages”. For some, this may conjure up images of a sci-fi like future where robots and machines have taken over, leaving society in a dehumanised state of mass unemployment and next to no inter-human interaction!

But Ulf Änggård, a director of AI initiatives at KTH Royal Institute of Technology’s Executive School in Stockholm, rejects such a dystopian vision of the future. While concerns about AI’s ethical implications and its impact on human labour should be taken seriously, Änggård suggests, AI itself also needs to be demystified.

“Sure, we as a society must decide what we want machines to be able to do, what their objectives should be,” says Änggård. “That’s a discussion that needs to be had, but the conclusion certainly shouldn’t be to reject AI.”

And yes, as machines get more sophisticated, some jobs will disappear, Änggård continues. For instance, translators may become redundant once there are computers that can translate texts faster and more accurately than humans. The same goes for bus drivers - we may not need them once we have self-driving vehicles, says Änggård. But such changes do not happen overnight, rather, it is a question of gradual adaptation.

“As AI technologies develop, people will come to understand that they need to be flexible and learn to do new things in new ways,” says Änggård. In fact, we are already adapting as some AI systems have become integrated into our daily lives. For instance, most of us use GPS technology to navigate, to find out which local transport options are available at a given time and how to avoid traffic jams. In other words, we are gradually changing our behaviour as AI systems take over some tasks. But at the same time, while we consult our cell phones for directions, we also still rely on our own knowledge, intuition and the help of strangers to get about a city.

And that is a lesson that businesses would do well to learn too, Änggård suggests. “Organisations and companies don’t need to change fundamentally overnight, rather it’s a matter of reorganising and redesigning businesses in order to adapt to the reality of AI, which is here to stay and will only become more and more advanced and prevalent.”

So, in 2020, as corporations start to harness the power of AI, what are some of the major trends to look out for?

The overall trend among companies, according to Änggård, is to switch from business models that are centred around humans and supported by computers to the opposite, to models that are centred around computers and supported by humans. Änggård also singles out Text to Speech and Automatic Speech Recognition technologies as a major AI trend right now. Examples are Google’s Translatotron, which can directly translate a person’s voice into another language, and Amazon’s Alexa, a virtual assistant.

Another big trend that will have an impact on a wide range of businesses are chatbots, which allow companies to automate customer service centres. “In some cases, customers end up getting more direct answers from chatbots than they would by interacting with a human being. These bots are about intelligently understanding what the customer wants and giving feedback,” says Änggård.

So, how far have things gone in Sweden, Änggård’s home turf? “Well, while many companies are trying out AI and want to explore it further - and imagine they understand the implications of the impact AI will have on them - I would say that not many Swedish companies have implemented AI that deep into their organisation.”

Änggård says companies like Spotify and Klarna are exceptions. They are built around a digitised business model and can deliver services without any human interaction, like recommending a song or offering online payment solutions. These companies are making use of the “superpowers of AI”, says Änggård. But in traditional industries its use is still fairly limited, and that has a great deal to do with the fact that traditional companies are “sticking to the old way of working, which is centred around humans performing services, perhaps supported by data insight from an AI system”.

That means traditional players are losing out and the likes of Amazon are winning. The latter is working with different fundamentals, where the whole delivery chain is digitised and the company can make use of the full force of AI. “Where you don’t have a cadre of employees, managers no longer need to spend a great deal of their time managing people, but can instead focus on designing efficient processes,” says Änggård.

Änggårdis convinced that AI will become a central feature of doing business in the near future. “Look at Google which has gone from vowing to be a mobile-first company to being AI-first. In the future,everything we do will be enhanced by AI services that can go beyond human capabilities. AI really is a once-in-a-lifetime transformative technology,” he says.

Yet, Änggård also warns against turning AI into a panacea that can solve any human dilemma or shortcoming. “I truly believe that AI offers the best opportunity to solve some of the biggest problems we face, problems that seem to be beyond humanity’s capability to solve alone, like finding a cure for cancer or understanding the impact of climate change. At the same time those who aren’t really knowledgeable about what AI can do also tend to create a lot of hype about its current and future potential, and have exaggerated expectations of AI.”

In many cases, humans are still more capable than machines and there are also ethical matters to consider. Machines cannot make moral choices all on their own but need to be programmed to make those choices based on instructions from humans. “We would do well to keep in mind that just like with nuclear technology, AI can be used for both good and bad. Technology can be used for warfare and for treating cancer. How it is applied, well that’s a human choice,” says Änggård.

But on a more practical level, AI should absolutely be part of the strategic agenda in business, Änggård insists. “The core of any business should always be what it provides customers, what value it delivers. But AI will change how that value is delivered. AI systems can learn and adapt faster and they can provide more personal services than human beings can. It would be impossible for Spotify to employ a cadre of people to recommend each client what song they should listen to next or to compile individual playlists for each user.”

In other words, the power of AI is best harnessed where it can perform a service that is beyond human capabilities.

Ulf Änggård is Director of AI Initiatives at the KTH Executive School in Stockholm. He holds an MSc from KTH, the Royal Institute of Technology in Stockholm. He has a long track record in business and hands-on skills in machine learning, having worked within the IT industry for most of his professional life.